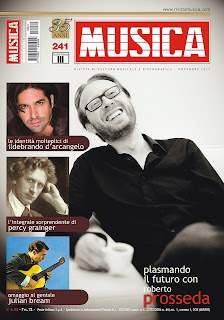 Italian barihunk Ildebrando d'Arcangelo is featured in the new issue of Musica, which you can purchase for download online if you're not sipping a latté by a newstand in Milano.

The singer just wrapped up another successful run as Don Giovanni, this time at the Los Angeles Opera. He now heads to the Lyric Opera of Chicago where he'll be taking on the title role in Donizetti's Don Pasquale, which opens on November 25th. The production is directed by famed baritone Sir Thomas Allen.


After Chicago,  he returns to the Vienna State Opera as Alidoro in La Cenerentola and later in the title role of Le Nozze di Figaro. D’Arcangelo makes his Boston Symphony Orchestra debut in Haydn’s Mass in Time of War conducted by Rafael Frühbeck de Burgos in early 2013. Spring sees him in Spain at the Gran Teatre del Liceu in Il turco in Italia and at the Fundación del Teatro Lírico in Madrid in the Verdi Requiem.

Make sure to purchase your 2013 Barihunks Charity Calendar: