Hvorostovsky/Netrebko concert from Moscow's Red Square to be broadcast 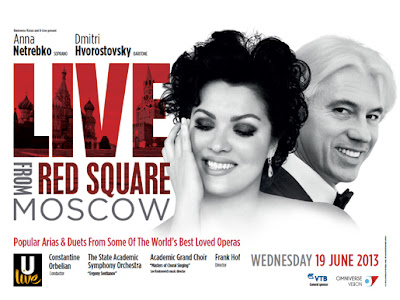 When we posted about Dmitri Hvorostovsky and Anna Netrebko's upcoming concert in Moscow's  Red Square last month, we promised that we've have additional broadcast details upon availability. We have particularly good news for you if you're in Europe or Russia, but disappointing news for everyone else.

The June 19th concert will be broadcast live across Russia beginning at 20:30 Moscow time on Russian State TV's cultural channel - RUTV. Audiences in France and Germany can enjoy the performance two hours later on ARTE. Four days later on June 23, the concert will be shown during prime time by Germany's ZDF. SKY Arts will broadcast the performance in the United Kingdom in October 2013, with cinecast details to be announced at a later date. Release in the U.S. is still a possibility, so stay tuned.