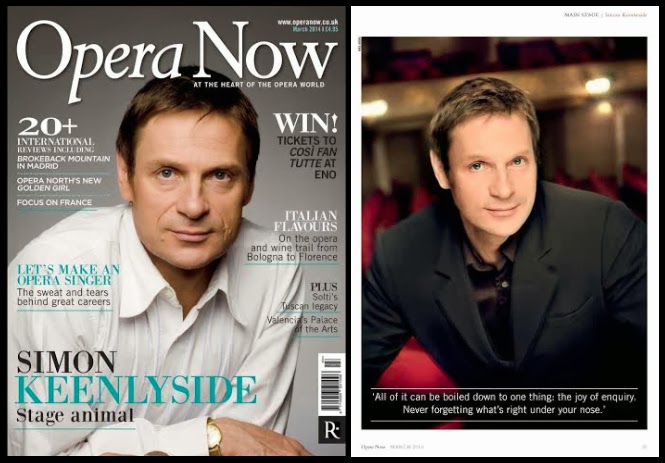 British barihunk Simon Keenlyside is like that bottle of fine wine that just keeps getting better with age. He has been seamlessly transitioning from a formidable Mozart singer into a world-class interpreter of the great Verdi roles. In fact his upcoming schedule, includes a run as Germont père in La traviata at Covent Garden in May and in Munich in July, as well as the title role in Macbeth, also in Munich.

He is the March cover boy for Opera Now magazine and he offers his usual intelligent and unfiltered thoughts on opera.  Perhaps the most eye-popping comments are about Richard Wagner:


Wagner, on the other hand, as much as Keenlyside admires him, paints with too broad a brushstroke. 'To my mind, the whole can never can be more than the sum of its parts.' the singer says. 'Wagner's stories are always about the bigger picture: right and wrong, punishment, reward. The Teutonic myths in Wagner tell the story of a great, deep, wonderful culture with which, ironically, I have a lifelong love affair. I just don't find his subjects very profound.'

He also provides a glimpse into his upcoming recording of American musicals from the 1940's and 1950's and Verdi's Macbeth. Of the latter, he says:


"Unfortunately, Macbeth is often played too loudly and sung too roughly. We know from Verdi's letters that in the first performance of Macbeth there was an interval of an hour-and-a-half, during which he rehearsed the singers because he was determined that they would sing piano and it the way he wanted. So he held the curtain until they got it right."

The March issue of Opera Now is currently available on newsstands.
at 8:56 PM