Every so often there's a Don Giovanni that comes along where one can actually believe the sexual conquests listed in Leoporello's catalog aria. (In Italy, six hundred and forty; In Germany, two hundred and thirty-one; A hundred in France; in Turkey, ninety-one; But in Spain already one thousand and three).

Such is the case with Zach Altman's sexy and shirtless portrayal at the San José Opera. Regular readers will recall a photo of Altman in a towel that we ran, which for almost a year was one of our most clicked on photos. That photo ran four years ago and Altman still looks great, but he has also emerged into one of the most compelling entertainers and singers on stage. 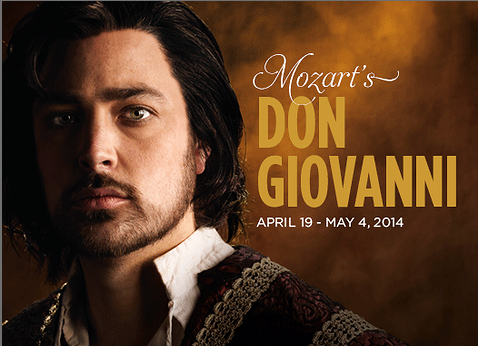 By the way, the catalog aria in this production is sung by Eugene Brancoveanu, who has also appeared shirtless on this site. There are two casts for Don Giovanni, and Altman can be seen on April 19, 24, 27 and May 2. Tickets and additional cast information are available online.

He was also featured in this article from the San José Mercury News where he discusses the role and his time on the roster at the San José Opera.

Altman has been a resident artist at the San José Opera for the last two years, where he has sung Zurga in Bizet's Pearl Fishers, Dr. Falke Johann Strauss' Die Fledermaus, Count Di Luna in Verdi's Il trovatore, and the title role in Puccini's Gianni Schicchi.

Altman can next be seen this summer at the Caramoor Festival as Astolfo in Donizetti's Lucrezia Borgia opposite soprano Angela Meade and Marullo in Verdi's Rigoletto.
at 6:42 AM