The Salzburg Festival has assembled three of the most popular barihunks for their production of Mozart's Don Giovanni. Ildebrando D'Arcangelo is singing the title role, Luca Pisaroni is his sidekick Leporello and Alessio Arduini is Masetto. Fans of a pulchritudinous men will be pleased to know that Don Giovanni and Masetto both show off their upper torsos liberally in Sven-Eric Bechtolf's production.

There are six performances remaining between July 30 and August 18, but two of the shows are already completely sold out. If you plan on attending, go to the Festival website and order your tickets today. 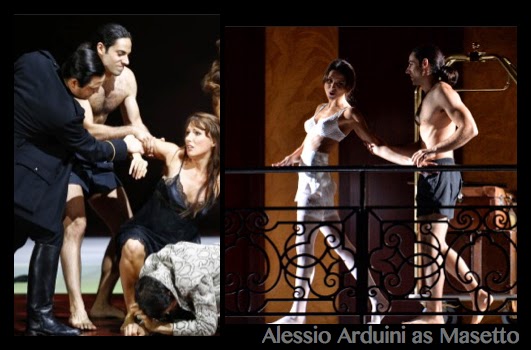 If you can't make a live performance, the production is being recorded by ServusTV in cooperation with UNITEL CLASSICA and will be broadcast as live on Sunday, August 3 at 7:30 PM. If you live in Europe, you can download the ServusTV app to your iPad.

If you're in the United States, you can catch Alessio Arduini at the Metropolitan Opera in Puccini's La bohème as Schaunard this November with Kristine Opolais as Mimi. Luca Pisaroni's next U.S. performance in a complete opera is also at the Met in their Don Giovanni, which runs in February and March 2015. Ildebrando D'Arcangelo's next U.S. stage appearance is also in Don Giovanni, but on the other coast, when he sings the title role at the revived San Diego Opera.