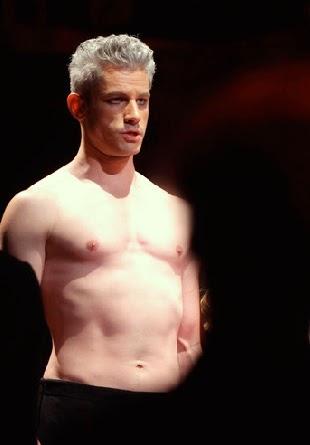 We posted about the Los Angeles Philharmonic's Mozart -Da Ponte Trilogy with a barihunk in Le nozze di Figaro trio back May. The main eye candy in that production, which also included Christopher Maltman and Brandon Cedel, was an oft-shirtless Edwin Crossley-Mercer as Figaro.

The production set was designed by Pritzker Prize-winning architect Jean Nouvel, with costumes by couturier Azzedine Alaïa. On alternating nights you barihunk connoisseurs feasted their eyes on a Don Giovanni cast that included barihunks Mariusz Kwiecien and Ryan Kuster.

We posted a semi-shirtless of picture of Crossley-Mercer back in May, but we now have additional photos from the production. We can see why we received a generous amount of emails begging us to find some photos.

If you want to catch Crossley-Mercey live, on August 10th, he'll be performing a song recital with accompanist Fernando Pérez at the Sala Verdi in Montevideo, Uruguay. From October 13-21 he reprises his huge success as Pollux in Rameau's Castor et Pollux at the Théâtre des Champs Élysées in Paris. Tickets and additional cast information are available online.


Also, don't forget about his upcoming release of Michael Linton's 17-movement song cycle Carmina Catulli, which we posted about last week.
at 7:27 AM