Seth Carico returns to hometown for "King and I"

We've been following Seth Carico since his amazing turn as Victor in Jorge Martin's Before Night Falls at the Fort Worth Opera Festival. We followed him from his larger-than-life portrayal of the Castro-esque revolutionary leader to his fitness obsession and invitation to appear in our Barihunks calendar.

He eventually landed for a year at the prestigious Merola Opera Program in San Francisco before being snatched away by the Deutsche Oper Berlin, where he has impressed audiences in Billy Budd, Les Troyens, Don Giovanni, Tosca, Die Zauberflöte, Otello, Rigoletto, Le nozze di Figaro, and Champert’s Hoffmann.

Carico recently returned to his hometown of Signal Mountain, Tennessee to perform in the "King and I," where he started his career as one of the King's children in 1991. This time he'll be the king and perhaps surrounded by some children who dream of following in his footsteps. 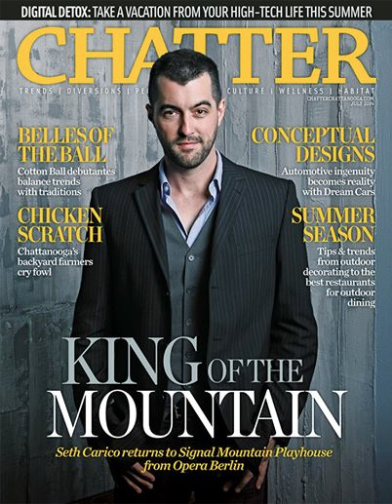 He was recently interviewed by Chattanooga's Chatter magazine about his career and his return to his hometown, which you can read in its entirety HERE.

In the article he also talks about his obsession with fitness, stating:


"I’d say the biggest part of my life other than singing is fitness. It’s become a real obsession of mine. I was really unhealthy a few years ago. I was doing a show, and I felt really terrible and decided that something had to change. I had to get in shape. It was actually The King and I in Virginia that gave me my deadline to get in shape, because I knew I would be shirtless for that show. I lost 75 pounds, and I kept it off. Now it’s become an important part of who I am as a performer and who I am as a person."

On August 14th, he'll be appearing in Richard Strauss' Salome at the Proms in London under the baton of Donald Runnicles. He then returns to the Deutsche Oper Berlin where he'll be performing Junius in Brittens' The Rape of Lucretia, Zuniga in Bizet's Carmen and The Speaker in Mozart's Die Zauberflöte.
at 9:18 PM