The Lyric Opera of Kansas City is opening its 58th season with Mozart’s Don Giovanni featuring the barihunk trio of Daniel Okulitch in the title role, Joshua Bloom as Leporello and Rhys Lloyd Talbot as Masetto. Performances are on September 26 and 30 and October 2 and 4 at the Kauffman Center for the Performing Arts. Tickets are available online. 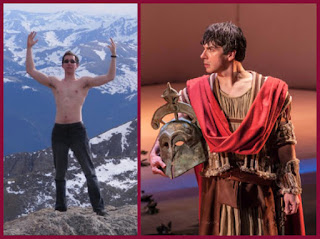 The trio are also all alumni of the prestigious Merola Opera Program in San Francisco, with Daniel Okulitch taking part in 2002, Joshua Bloom in 2001 and 2003, and Rhys Lloyd Talbot in 2013 and 2014. Elizabeth Caballero, their Donna Elvira, was in the program with both Okulitch and Bloom.

After Don Giovanni, Bloom will portray The Pirate King in Gilbert & Sullivan's The Pirates of Penzance in October at both Théâtre de Caen and Les Théâtres de la Ville de Luxembourg. Okulitch will head to the Manitoba Opera where he will sing Count Almaviva in Mozart's Le nozze di Figaro. Talbot just completed the Young Artist program at Glimmerglass where he performed the Speaker/Second Priest in Mozart's The Magic Flute and the Apparition in Verdi's Macbeth.
at 7:23 PM