The Zürich Opera's new production of Rossini's Il viaggio a Reims features a bit of skin as well as quartet of barihunks and an American hunkentenor.  The low voices include Nahuel Di Pierro as Lord Sidney, Scott Conner as Don Profondo, Pavol Kubàn as Don Alvaro and Roberto Lorenzi as Don Prudenzio. They join hunkentenor Spencer Lang as Don Luigino. The show opened on December 6th, but has seven more performances through January 9th.


We featured Scott Conner after he won the Loren Zachary Competition (using a shirtless photo!), Nahuel Di Pierro was in a Don Giovanni post, and Kubàn was a reader submission two years ago. Roberto Lorenzi is the newcomer to this site.

Lorenzi studied at the Luigi Boccherini Institute of Musical Studies.He has been a prize winner at the Titta Ruffo and Riccardo Zandonai competitions, and took first prize in 2011 at AsLiCo’s 62nd annual competition, where he was awarded the role of Don Basilio Rossini's Il barbiere di Siviglia in Lombardy. He is a member of the Zurich International Opera Studio and debuted on the main stage as Priore in Bellini's La straniera alongside Edita Gruberova. In Zürich, he's appeared in Il barbiere di Siviglia, Il matrimonio segreto, La fanciulla del West and Rigoletto.

ONLY 11 DAYS UNTIL THE NEW YEAR! Time is running out to order your 2016 Barihunks Charity Calendar, featuring 18 of the sexiest men in opera. ORDER TODAY by clicking HERE (you won't regret it!). 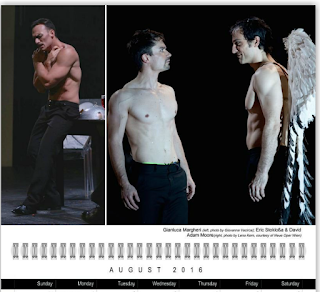