LaMarcus Miller, who first appeared on this site competing in the Met Auditions, has landed the leading baritone role in Tobin Stokes and Heather Raffo's Fallujah at the Long Beach Opera. Miller sang in the workshop at the Kennedy Center, which was one of a series over the last four years including at Arena Stage, the Noor Theater in New York City and The Culture Project in New York City. The Long Beach production will be the official world premiere.

The opera's characters were inspired by people United States Marine Christian Ellis encountered, including fallen comrades. In 2004, Christian Ellis was a young US Marine fighting in the Iraq War. He suffered a broken back when his platoon was ambushed, and was one of the few survivors. When eventually he returned home he found himself battling post-traumatic stress disorder (PTSD). Ellis has attempted suicide four times since returning from Iraq and used developing the opera as a vehicle to deal with the stress. Ellis' mother was a singer who pushed him to play the trumpet and start singing lessons when he was nine years old.

Award-winning Iraqi-American playwright and librettist Heather Raffo met Ellis in the winter of 2011. After extensive interviews began the process with composer Tobin Stokes of translating elements of Ellis's wartime experience into the opera. Fallujah is believed to be the first opera to deal with the Iraqi War.

Performances will run from March 12-20 the National Guard Armory in Long Beach. Tickets are available online.

In 2012, LaMarcus Miller won First Place at the Nico Castel International Master Singer Competition at Carnegie Hall. That same year he won the Encouragement Award at the Metropolitan Opera National Council Audition for the Eastern Region.

MAKE SURE TO ORDER YOUR 2016 BARIHUNKS CALENDAR BEFORE THE NEW YEAR ARRIVES; 18 OF THE WORLD'S HOTTEST SINGERS FROM 9 COUNTRIES. 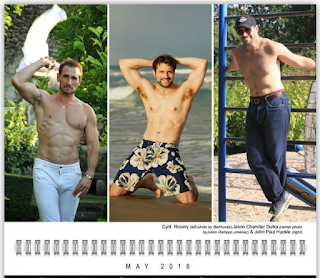