Every so often, we like to present historical bari-hunks to our readers. French bass-baritone Gérard Souzay is a singer who generates some controversy among lieder afficionados. He was criticized for having a smallish voice and for creating emotion through exaggerated phonetic dramatization, which critics maintained stifled the true meaning of the words and music. However, history has served him well, and he in now remembered fondly for his excellent musicianship, perfect diction, sense of style (particularly in French) and detailed interpretations. We're huge fans and have featured him regularly on the site.

Gérard Souzay was born on December 8, 1918 as Gérard Marcel Tisserand to a musical family in Angers, France. In college, he concentrated on Philosophy, which he continued to read widely after making his career as a singer. After graduating, he went to Paris to pursue philosophy, and to study voice with Pierre Bernac, Claire Croiza, Vanni Marcoux and Lotte Lehmann. Later, he entered the Paris Conservatoire (1940-1945), where he was a prize-winning student.


Gérard Souzay made his professional debut in 1944, his New York debut in 1950, and his opera stage debut at the Festival of Aix-en-Provence in 1958, where he sang roles in Cimarosa's Il Matrimonio Segreto and Purcell's Dido and Aeneas. Since then, his operatic career developed parallel to his career as a recitalist and concert singer and specialist in little-known repertoire. In 1960, Leopold Stokowski invited Souzay to interpret the role of Orfeo in Monteverdi's Favola d'Orfeo at the New York City Center Opera. In 1962, Ernest Ansermet invited him to play Golaud in Debussy's Pellèas et Mèlisande at the Rome Opera. Souzay also sang Golaud at the Paris Opéra Comique in the same year, in a performance celebrating the centenary of Debussy's birth. In 1963, at the Paris Opéra, he sang Don Giovanni for the first time. In 1965, he made his Metropolitan Opera debut as Count Almaviva in Le Nozze di Figaro; he also made his debuts that year at the Vienna State Opera and the Munich Opera. Known for his phenomenal gift for languages and dialects, Souzay was also greatly respected for his master classes.

Time is running out to order your 2016 Barihunks Charity Calendar, featuring 18 of the sexiest men in opera. ORDER TODAY by clicking below (you won't regret it!) 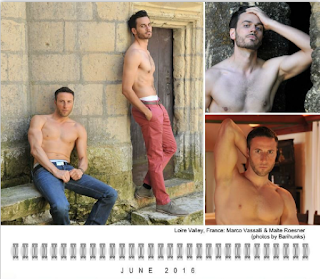