Uprorious "The Pearls of Cleopatra" returns to Berlin

Director Barrie Kosky's hilarious and highly entertaing The Pearls of Cleopatra (Die Perlen der Cleopatra) by Oscar Straus is back at the Komische Oper in Berlin. The piece was on the shelves for more than eighty years before it was revived in 2016. The latest run features almost the identical cast, led by German barihunk Dominik Köninger, who sings the role of the Roman Officer and appears in a number of pretty sexy situations throughout the operetta. 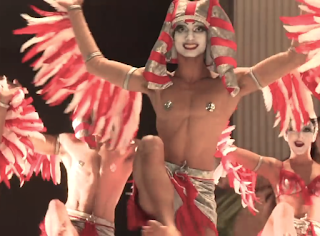 Kosky has been reviving works by composers who fled the Nazis, which Strauss did in 1939 following the Nazi Anschluss. He fled to Paris and eventually to Hollywood. After the war, he returned to Europe, and settled at Bad Ischl, where he died.  Straus' best-known works are Ein Walzertraum (A Waltz Dream), and The Chocolate Soldier (Der tapfere Soldat). He may be best remembered for composing the theme song from the 1950 film La Ronde. 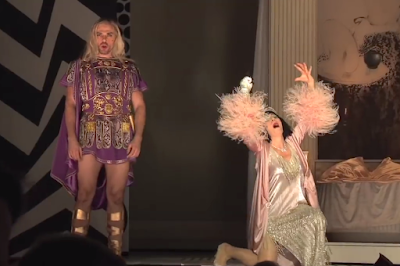 In the comedic The Pearls of Cleopatra, the queen longs for a ‘little Egyptian flirting’ to lift her mood. The permanent drought and the armies of the Roman Empire at the Egyptian borders have given her quite a headache. So she flirts with the Syrian prince Beladonis and takes Silvius, the Roman ambassador, as her new lover. International or intimate relations – the most beautiful queen of the world holds sway over the hearts of all men. Could the pearls be the secret to her power. 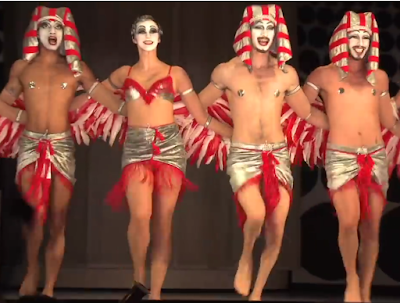 The Pearls of Cleopatra features plenty of scantily clad, energetic performers on stage, adding to the lively Cabaret feel of the pre-Nazi Weimar Republic. The operetta opens on January 31st and runs through March 30th. Tickets are available online. Opening night is SOLD OUT.

You can now support Barihunks by donating at Patreon.
at 7:39 AM