Barihunks Blog in the News, Part 2 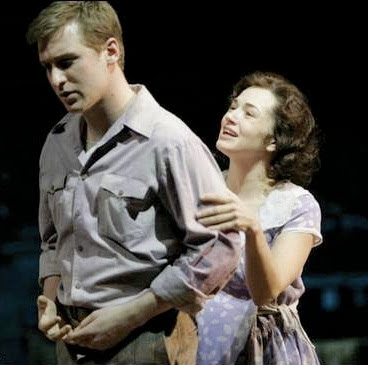 [Photo from the Vail Daily]

Jesse Blumberg, who I had the pleasure of seeing in recital recently, is going to be debuting a new opera by Ricky Ian Gordon called "Green Sneakers." The opera is an homage to Gordon's lover who died of AIDS. Gordon explains why he chose the straight barihunk:

“Just in watching him work, and watching him sing, he’s completely guided by truth,” Gordon said. “He doesn’t get up there and fake anything. If he doesn’t feel it, he doesn’t do it. His sound is very easy to enter, it’s opulent and beautiful but it’s also sort of matter-of-fact.”

One can find the complete article here at http://www.vaildaily.com/article/20080710/AE/573783995/1078&ParentProfile=1062
We love that we're discovering these baritonal boys of beef like Blumberg before the mainstream media (and appreciate the shout outs). Here is the mention of Blumberg's appearance on Barihunks.

Already, the media has been starting to take notice of the baritone. A March 2007 article in The Baltimore Sun commented on Blumberg’s performance in “The Return of Ulysses to His Homeland” at the Opera Viventa: “In the title role, Jesse Blumberg commanded the stage, physically and vocally. His virile baritone grabbed the melodic lines with remarkable dynamic force, lighting up the hall with his every appearance.” Blumberg even got a shout-out in the blog “Barihunks,” which claims to chronicle “The Sexiest Baritone Hunks from Opera.”

Another great article on "Green Sneakers" with some text from the opera can be found here: http://www.denverpost.com/headlines/ci_9832357