Maltman & Shrott Together in Salzburg 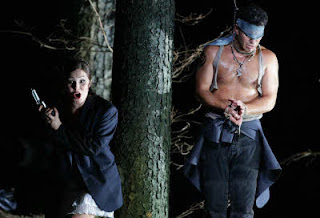 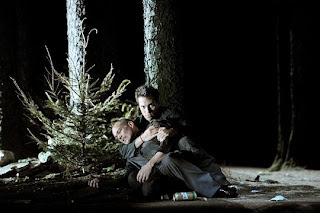 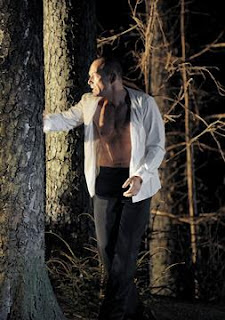 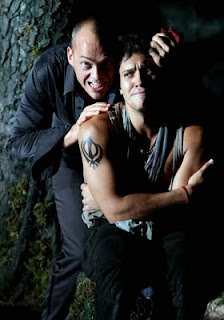 One would think it would be difficult to go wrong with two barihunks in one production. Unless, of course, you handed over the production to a crazy German director. The reviews were universally pretty brutal, but the photos are great!

Here is the review from the Kleine Zeitung:

[Claus Guth´s Don Giovanni] is mainly about greed of life and fear of death. With set designer Christian Schmidt he has relocated the entire action to a the middle of a dark forest [into which Don Giovanni flees after his fight with the Commendatore], where surprisingly there also is a bus-stop. Don Giovanni and Leporello inject drugs via syringes and are quickly in ecstasy...

Claus Guth, who received far more booh´s at the final curtain call than the conductor, virtually shows the final three hours of Don Giovanni´s life in "real time", as Don Giovanni in this version was seriously injured during the duel with the Commendatore...

Guth´s Don Giovanni is not a great seducer, but the object of a desire created by Donna Anna, Donna Elvira and Zerlina. As Donna Anna realizes that no lasting happiness may be found with this Giovanni, she commits suicide - only possible since the "Vienna version" without the final sextet is played here in Salzburg.

Musically it was mediocre. Conductor Bertrand de Billy succeeded only with the two introductory D-minor chords and the final scene. In between, he usually applied fast and sloppy tempi, under-challenging the Vienna Philharmonics.