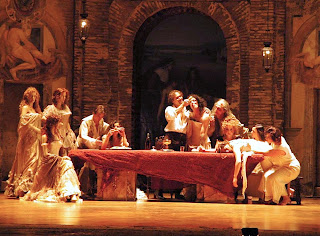 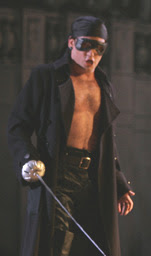 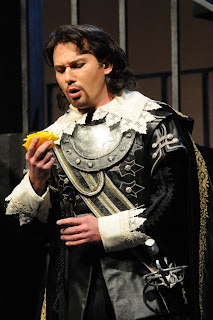 [Mariusz Kwiecien as Don Giovanni in Santander Opera House in Spain and Houston; Bottom photo in I Puritani in Seattle]

I just saw Howard Shore's "The Fly" in Los Angeles, which had a lot of male nudity and it wasn't nearly as hot as Mariusz Kwiecien as Don Giovanni in the San Francisco Opera's production of the opera (same production as above). It was so incredibly sensuous and he managed to make a dinner table as sexually desirable as the bedroom.

The photo from Houston shows him at his physical prime and could make one forget Zorro forever. And what woman (or man) wouldn't be completely seduced by Mariusz thinking of you while sniffing a rose?
at 7:34 AM