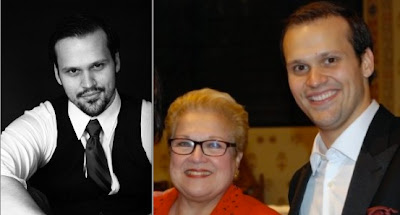 [Ed Parks with legendary mezzo Marilyn Horne]
We love our New York fans, because they are pushy, demanding and know what they like (and don't like). We received our first request to post Ed Parks over a year ago and we have received a steady stream of emails about his performances, participation in the Lindemann Young Artists program and addition to the Met roster. We figured that we better post him before this blows up into the operatic version of the mosque debate.

As mentioned, Parks is a second year participant in the Metropolitan Opera’s Lindemann Young Artists Development Program. He made his Metropolitan Opera debut as Fiorello in Il Barbiere di Siviglia in 2009-2010. A native of Indiana, Pennsylvania, Parks received his bachelor’s degree from Oberlin and his master’s degree from the Yale School of Music. This season, he returns to the Metropolitan Opera as Schaunard in La Bohème on both the mainstage and on tour in Japan, and as Larkens in the new production of La Fancuilla del West, which will be broadcast in HD around the world as part of the Met’s Live in HD series.

On Monday, September 27 at 8 pm Parks will perform Schubert’s song cycle Winterreise in the Morse Recital Hall in Sprague Hall at Yale University. For FREE tickets visit the Yale website or call the Yale School of Music concert office at 203 432-4158.

Email us at Barihunks@gmail.come
at 7:29 AM