Rub-a-dub-dub, a barihunk in a tub

The last time we featured English barihunk Robin Adams on the site, he was performing a shirtless Eugene Onegin in Bern, Switzerland. Adam's Onegin stalked Tatiana around the stage like a crazed sexual predator. His performance was critically acclaimed and added a thrilling element to the opera, which is usually conservatively costumed and staged.

It appears that opergoers in the Swiss capital are in luck again, as Adams is shedding his threads for the new production of Don Giovanni at the Stadt Theatre Bern which opens on Thursday, February 24. The opera company, which sits in the large shadow that is cast by the opera in Zurich two hours down the road, always manages to put on an interesting show. They were also smart enough to use the sexy singer in their marketing materials, which caught the attention of one of our Zurich-based readers. 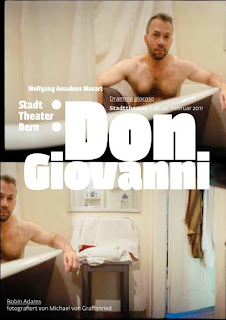