Barihunks in the mainstream press talk about fitness

The term "barihunks" seems to have entered the mainstream vocabulary and our wish is that it finally makes it into the Oxford Old English Dictionary (OED) this year. That's when we'll know the term is here to stay. One thing we know for sure is that you can't walk into a theater without hearing the term thrown around. We recently received a call from a singer while he was getting his makeup done backstage and he had to let me know that the entire crew was talking about his recent appearance on the site.

Yesterday, the Toronto Star ran a piece about singers working out and how the introduction of HD videos and rising physical acting demands from director are forcing singers to work on both their voices and their bodies. A soprano whose boyfriend has appeared on this site regularly told me, "Having a great body may not provide an edge to someone singing Norma or Brunnhilde, but is sure does for roles like Juliette, Mimi or Leïla."

The Star article focused a lot on tenor Adam Fisher, who is opening in Operetta Theatre’s La Vie Parisienne on Tuesday, and barihunk Vasil Garvanliev, a regular on this site and at Opera Atelier. In fact, our favorite quote came from Marshall Pynkoski, co-artistic director of Opera Atelier, who observed,  “It is muscular control, not weight, that supports strong singing...No one is at their best pulling 100 extra pounds." 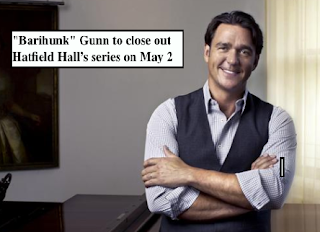 We also got a kick out of the recent headline in the Terra Haute Tribune-Star announcing "Barihunk Gunn to close out Hasfield Hall's series on May 2." Gunn has been one of an increasing army of singers who has touted the benefits of working out for having not only a successful career, but a long-lived career. Readers may remember the features that the Wall Street Journal's Health Section did on Nathan Gunn and on New Zealander Teddy Tahu Rhodes, another fitness buff and surfer.

He commented to the Terra Haute paper, "I think something like that is good for my business. It helps break down those old outmoded stereotypes about opera.” 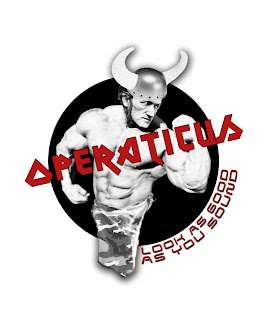 Singers looking for a social network in their efforts to stay fit or get fit can join Operaticus on Facebook, which has the tagline, "Look as good as you sound." Singers share workout tips, post pictures and even encourage meetups to go work out. The group was founded by BariChunk turned BariHunk Michael Mayes whose transformation has launched his career and made him the definitive exponent of Joseph De Roucher in Jake Heggie's Dead Man Walking, a role that requires the singer to do pushups while singing.

Fans of Michael Mayes can still catch his performances in Tom Cipullo's Glory Denied at the Fort Worth Opera. Performances run through May 11th and it's one of the hottest tickets of the summer.