Listen to Henk Neven live on the BBC

Our goal at Barihunks is two-fold, to promote great low-voice singers, especially since baritones tend to get lost in the shadows of the tenor and soprano p.r. machines. We also believe in promoting singers who take care of their voices as well as their bodies. Not only is it good for a long, healthy career (i.e. - Thomas Hampson, Simon Keenlyside, Rod Gilfry and Nathan Gunn), but it makes opera a more believable art form and it allows it to compete with the omnipresence of television, movies and online media.

There are few singers who we've been more excited about than the Dutch barihunk Henk Neven. When he shot onto the scene, we instantly compared him to a young Dietrich Fischer-Dieskau for his ability to beautifully convey the nuances of an art song. We first featured him almost two years ago, long before he was receiving Gramophone magazine nominations for his great singing.

He's also our birthday feature for tomorrow, so we were thrilled when we learned that BBC3 was giving the public Henk Neven as a birthday gift. His French song recital with English soprano Geraldine McGreevy and accompanist Graham Johnson can be heard live at 7:30 PM London time (2:30 PM EST/11:30 AM PST). 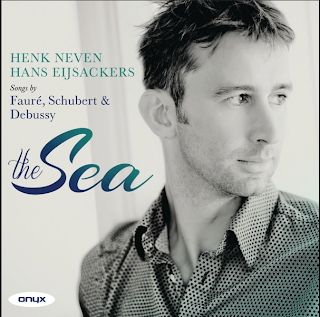 The program from Wigmore Hall features music by Debussy, Faure, Satie, Roussel and the rarely-heard Andre Caplet. Faure's song 'Le plus doux chemin' is the inspiration for Graham Johnson's latest series of themed recitals, exploring the tonal beauty, vibrant imagery and sense of spontaneity that is French chanson.

Henk Neven is a former Radio 3 New Generation Artist, and also studied with Graham Johnson and his latest CD is an acclaimed recital of mostly French songs.

Click HERE to listen to the broadcast.
at 7:42 AM