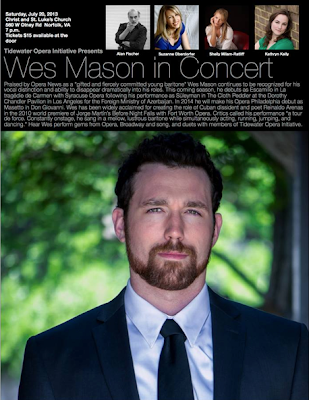 When a concert promotes its singer as a "barihunk," how can we not post about it? We caught the Tidewater Opera Initiative's post on Facebook about Wes Mason's upcoming recital that refers to Mason as their "handsome barihunk." Make sure to visit their Facebook page and like them.

Wes Mason has been a regular on this site and is one of our favorite singers in the business. He's appeared in our charity calendar, which benefits young artists, and has agreed to appear again this year. Make sure to check out our recent post about his new promotional photos and his celebrity doppelgänger.

Mason will be appearing with the Tidewater Opera Initiative on two consecutive days. On Saturday, July 20th at 7 PM, he will perform a recital featuring some of opera and Broadway's greatest hits. On Sunday, July 21st from 2-5 PM, he will conduct a special master class for members of the Governor's School for the Arts vocal program and Tidewaters's opera chorus.

Both events will take place at Christ and St. Luke's church in downtown Norfolk, and all proceeds benefit Tidewater Opera Initiative's upcoming production of Mozart's Cosi fan tutte. Tickets for Saturday's concert are $15 and can be purchased at the door. Sunday's master class is open to the public for a suggested donation of $5 at the door.

Tidewater is a regional opera organization based in the Tidewater area of Virginia dedicated to the development of local professional opera singers. Wes Mason hails from Norfolk, Virginia and graduated from the Academy of Vocal Arts in Philadelphia. His big career break when he starred in the world premiere of Jorge Martín’s Before Night Falls with Fort Worth Opera.