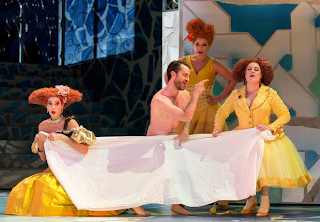 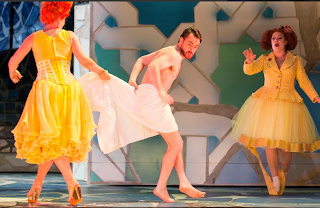 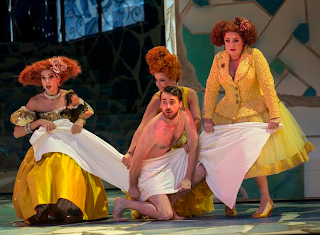 We love when a post about a barihunk begets more barihunks, which is what happened when we ran a feature on Peter Bording's run as the title character in Rossini's Barber of Seville at the Nationale Reisopera. Not only that, but we learned about the sexy set and costume designer Gary McCann, who will drive our ginger lovers into fits of frenzy.

It's not often that the role of Basilio makes it onto Barihunks, but former tenor and director Laurence Dale has made him the sexiest character in the opera. We were sent these tantalizing pictures of British barihunk Nick Crawley with the "3 Bertas," a novel concept that looks like loads of fun.

Crawley, who is new to this site, is a member of the ensemble at the Nationale Reisopera where he's also singing Escamillo in Bizet's Carmen, three roles in Purcells The Fairy Queen and the bass part of Bach's St. John Passion. Crawley was born in Buckinghamshire and started his musical career at St. Albans Cathedral Choir where he was head chorister. He studied at the Royal Academy of Music and completed the Royal Academy Opera Advanced Diploma course.  Nicholas won a place on the Concordia ensemble 2010 and was awarded The Independent Opera Vocal Scholarship at the Royal Academy of Music 2012.

And for you lovers of great beards and all things ginger, we present costume and set designer Gary McCann and his red-headed Bertas - Zinzi Frohwein, Sonja Volten and Ruth Willemse.

Have you purchased your Barihunks Charity Calendar? The holiday shopping season is kicking into full gear next week, so order NOW by clicking the Lulu button below.