Director Neil Armfield's Der Ring des Nibelungen at Opera Australia was quite the buzz even before it opened. Now that the first cycle is wrapped up the buzz has only escalated about this dreamlike Ring Cycle that pushes the imagination. All is all, it seems to be a critical success.

Of course, our readers are buzzing about barihunk Jud Arthur's surprising entry from his cave as the mortally wounded Fafner, splattered with blood and completely naked. Rather than feeling like German regietheater, our contacts in Australia said that it gave the moment a heartfelt humanity as Fafner, stripped bare, warns Siegfried of the Ring's power.

One reviewer called Arthur's Fafner a "Pagliacci vesti-la-giubba moment," as he's seen applying make-up in front of a dressing-room mirro. Fafner grimaces into a camera built into the mirror which projects his magnified image to the audience until he eventually appears before the naive Siegfried as a naked vulnerable man.

Jud Arthur was born in New Zealand, worked as a farmer in Mosgiel, and then began a career as a professional rugby player. He's been one of the most popular regulars at Opera Australia for a decade now and also moonlights as a professional model. 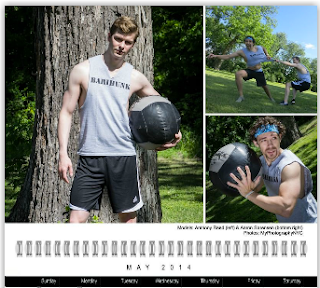 You can enjoy beautiful barihunks all year with our 2014 Barihunks Charity Calendar. It's the perfect gift for the holidays. Click below to order now. Every penny of profit goes to benefit young artists.