We were asked the other day where we find our endless supply of barihunks. Most come from opera companies, colleagues, and friends and family. Our latest came from a tweet from Joseph Ford Thompson Photography, who wrote "Check out my latest photoshoot.  I think we have a new member of the #Barihunk family."

He was talking about Scottish bass-barihunk Michael Mofidian, who recently began his Master of Arts program in Vocal Performance at the Royal Academy of Music in London. He started his studies as a youth playing the violin and piano, before beginning formal instruction in harmony and counterpoint at St Mary’s Music School, where he was the recipient of a piano scholarship. Michael then read Music at Jesus College, Cambridge, graduating in 2014 with first-class honours.

His studies are being funded by an Associated Board of the Royal Schools of Music Scholarship and a Help Musicians UK Fleming Award. He is especially interested in 20th-century and contemporary music. His operatic roles have included the Ferryman in Britten's Curlew River, Parson/Badger and Harasta in Janacek's The Cunning Little Vixen, and the Father-in-law/Le pauvre matelot and Adorno in the UK première of Act II of Schreker’s Die Gezeichneten.  He recently created the role of God in Joshua Borin’s new chamber opera CAIN. 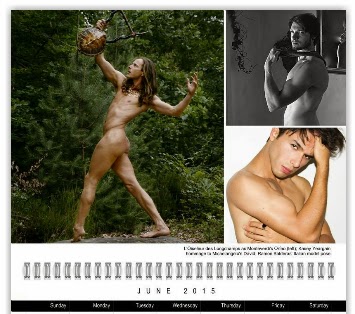 Have you ordered your 2015 Barihunks Charity Calendar before the Holiday rush begins? Click below and enjoy 19 of opera's sexiest men year around.