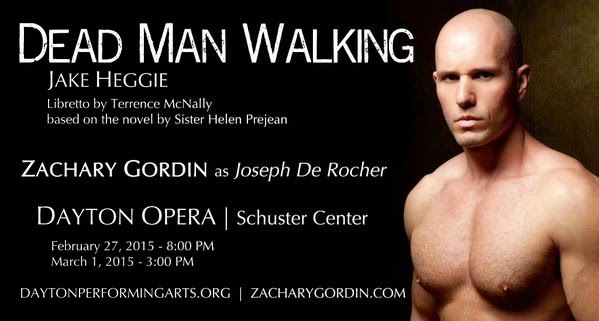 The Dayton Opera has announced that über-barihunk Zachary Gordin is replacing John Arnold in their production of Jake Heggie's Dead Man Walking. The role of the accused killer Joseph de Rocher should be a natural fit for the gym toned singer, who is required to sing an aria while doing pushups. This is Gordin's role debut and first appearance with the Dayton Opera. Singing the critical role of Sister Helen Prejean will be mezzo-soprano Catherine Martin.

Performances are on February 27 and March 1st. Their season continues with another barihunk, Matthew Worth, in the oft-shirtless role of Zurga in Bizet's Pearl Fishers. There will be two performances on April 17 and 19. Additional information and tickets for both operas are available online.