We first introduced Aussie barihunk Brett Carter to readers last year when he was performing  Mercurio in Cavalli's Calisto at the Hessischen Staatstheaters in Wiesbaden. We featured some sexy shots of him performing in Britten's Rape of Lucretia and Ravel's L'heure espagnole.

Brett is a now an ensemble member at the Staatstheater in Mainz, where his upcoming performances include the baritone solo in Orff's Carmina Burana opening on November 22 and Alloro in Dusapin's Perelà in the Spring 2016. He's currently performing Valentin in Gounod's Faust (Margerete) and once again showing off a little skin for the German audiences. Performances run through February 14 and additional cast information and tickets are available online.

Next year, he'll be returning to his native country to sing the title role in Rossini's The Barber of Seville.

Carter studied Classical Guitar and Voice at the Western Australian Academy of Performing Arts. He then became a member of the Australian Opera Studio where his roles included Mozart’s Conte Almaviva, Don Giovanni and Britten’s Tarquinius. After receiving a Scholarship to participate in the Cincinnati Music Festival in Lucca, Italy, he then went on to become a Young Artist with Opera Queensland. During this time he received first prize in the German Australian Opera Grant and from 2007- 2014 was a member of the Hessischen Staatstheater in Wiesbaden. 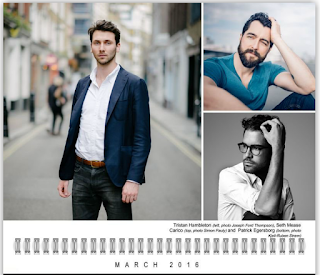