Hunkentenor turned barihunk Vincent Simonet is a native of Bayonne in the Basque region of France. He is a decendent of the famous 19th century baritone Paul Barroilhet (aka Paolo Barroilhet), whose bust still graces the Opera Garnier in Paris. Barroilhet created a number of Donizetti roles, including Eustachio de Saint-Pierre in L'assedio di Calais, Lord Duke of Nottingham in Roberto Devereux, Alfonso XI of Castile in La favorite and Camoëns in Dom Sebastien.

This summer at the Centre Européen de Musique, Simonet performed Dandini in Rossini's La Cenerentola coached by the great Spanish mezzo-soprano Teresa Berganza. He has also been heard in Joseph Haydn's Isola Disabitata in Saint-Denis, as Fritz in Jacques Offenbach's La Grande Duchesse de Gerolstein at the OPERACADEMY in Paris and in Rekviem 3, which staged Verdi's Requiem in an adaptation of Josef Bor's novel The Terezín Requiem at the Opera de Paris Bastille Amphitheater.

Simonet was asked by French composer Philippe Mazé to sing at the 100-year anniversary of the Cathedral of Monaco (Saint Nicholas Cathedral). The cathedral is home to the Roman Catholic Archdiocese of Monaco where many of the Grimaldis are buried, including Prince Rainier III and his wife Grace Kelly.

Simonet is also one of the initiators of the charity recital "Ensemble pour les Enfants Malades" (Recital for the Sick Children) which was a benefit for the Pediatric Immuno-Hematology Department at the Hôpital Necker de Paris.

You can enjoy hot men all year long in our new 2017 Barihunks in Bed calendar, which is now on sale at LULU. 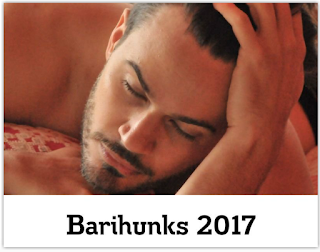