There will be performances on December 13 and 14 at the Centenary United Methodist Church. Tickets are available online.

On the opposite coast, Hoffman joins composer/conductor Matthew Aucoin for a concert on November 27th called "The Song: From Schubert to Springsteen," featuring music from Franz Schubert, Gustav Mahler, Francis Poulenc, Bruce Springsteen, Nick Drake and Radiohead. The concert will take place after the performance of Philip Glass' Akhnaten and is free to attendees. Non-attendees can purchase tickets for $5.

Hoffman has joined the Los Anegles Opera's Domingo-Colburn-Stein Young Artist Program for the 2016-17 season. He will sing a number of roles with the company, including Hermann in Les Contes d'Hoffmann (no relation), the Second Nazarene in Richard Strauss' Salome, First Editor in Bernstein's Wonderful Town and Il medico in Verdi's Macbeth with fellow barihunk Ildebrando D'Arcangelo as Banquo.

Hoffman completed his Bachelor of Music degree at The Juilliard School, where he was the winner of the 2015 Juilliard Vocal Arts Honors Recital and was presented in recital at Alice Tully Hall. Additionally at Juilliard, he performed Bob in Menotti’s Old Maid and the Thief, the Count in Le nozze di Figaro, Lunardo in Le donne curiose, and covered Tarquinius in The Rape of Lucretia. He made his professional debut with the Opera Theatre of Saint Louis as Thierry in Dialogues des carmélites. 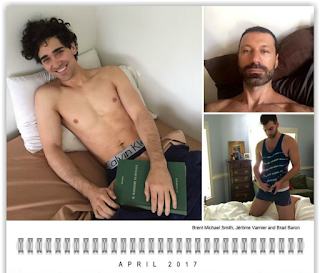