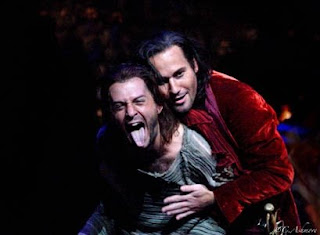 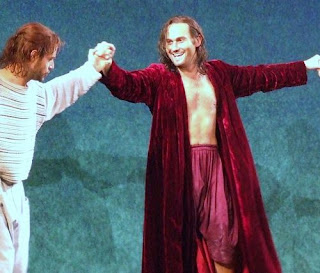 Just how close are Don Giovanni and his sidekick Leporello? In the libretto Leporello is at times hopelessly devoted to his master, but at other times seems quite willing to reveal him as the rake that he is.

Perhaps the second cast of Mozart's masterpiece at the Royal Opera House in London can help us answer that age old question.

Clearly, in the top photo Don Giovanni (Mariusz Kwiecien) and Leporello (Alex Esposito) seem to be sharing a particularly intimate moment. Later, at the current call, Esposito seems to be curious about what was poking at him earlier in the night.

Alex, did no one warn you about the Hot Pole? If you want a better look, check out this old Barihunks post: http://barihunks.blogspot.com/2008/05/guess-crotch.html