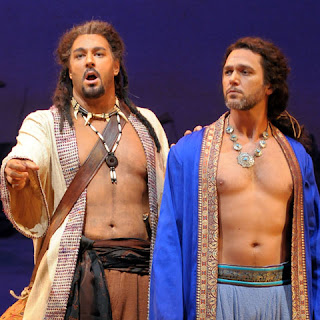 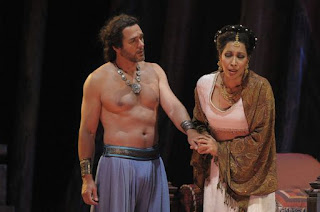 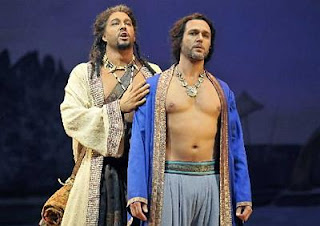 I'm not sure if I'd recognize Nathan Gunn with his shirt on and that's the way it should be. At 38, he stills looks great singing Zurga opposite Nicole Cabell and Eric Cutler (who is looking pretty good these days). Wikipedia has this to say about our favorite Top Gunn:

While he is justly famous for his vocal prowess and acting, Nathan Gunn has received almost more fame for his physique, a peculiar feat for an opera singer.

It looks like we'll be seeing a lot more of Nathan Gunn in all of his cuteness, as his next three roles are in the Magic Flute (and he is the world's most adorable Papageno), Rape of Lucretia and the world premiere of Andre Previn's "A Brief Encounter" based on a Noel Coward play.

Let's just hope that he sings in briefs!