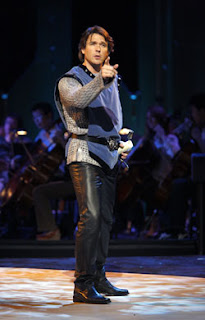 How can I top Rex Reed's description of Nathan Gunn's recent performance in Camelot?

The Philharmonic never sounded fuller or richer, the score is still gorgeous, and the energy and charm of Nathan Gunn was so overwhelming you could forgive everything loopy that surrounded it. This was a Camelot (and a production of Camelot) that was clearly claimed and ruled by this dynamic, mesmerizing baritone, in a triumphant performance that transported Lancelot into the most dashing knight who ever turned a Round Table upside down. He has been praised throughout the world in a panoramic field of dramatic operas ranging from The Magic Flute and The Barber of Seville to Billy Budd and An American Tragedy, so his acting chops come as no revelation, but now Mr. Gunn has turned his first Broadway-style career crossover into a titanic triumph, capturing every aspect of Lancelot’s personality—pompus, hilariously vain and obsessively self-worshipping on “C’est Moi”; chivalrous and sexy in the Queen’s arms; valiant with a sword; growing into tenderness and humility after betraying the king he loves more than his own ego—with a virile and colorful stage presence, a convincing French accent and a lyrical voice rich in depth and tone. Unless the music world has given up the search for another Alfred Drake, someone is busily creating a new Broadway musical just for him, as we speak. Camelot sometimes meandered, but Nathan Gunn was unforgettable.