Here's a shot of Nicolas Courjal as Masetto looking at fellow barihunk Franco Pomponi in a production of Don Giovanni in Montpellier, where he is currently singing The Speaker in Die Zauberflote opposite Detlef Roth, the brilliant Sandrine Piau and the Queen of the Night as sung by Uran Urtnasan-Cozzoli. 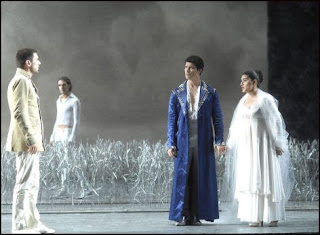 The French-born bass studied at the Conservatory in Renne and established himself at the famed Opera Comique in Paris. Like many basses, he's not given many barihunk roles, getting stuck singing Zuniga instead of Escamillo, and Basilio rather than the Barber. That's why we decided to feature a picture of him offstage, so that Barihunk fans can see him in his full glory and not dressed up looking like Moses.