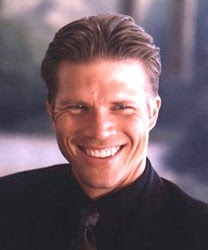 Barihunk Rod Gilfry, who is currently starring in the national tour of South Pacific, will play Captain Georg von Trapp in Rodgers and Hammerstein's The Sound of Music, at the Théâtre du Châtelet in Paris, France from December 6 to January 3.

The cast also includes fellow barihunk Laurent Alvaro as Mad Detweiler. Alvaro appeared nude on this site in December 2008 when he was in the second cast of The Fly at Théâtre du Châtelet.