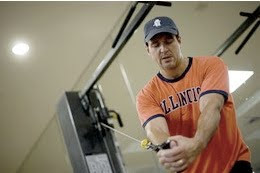 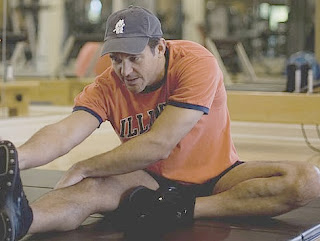 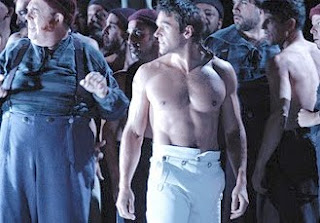 The Wall Street Journal ran this feature on barihunk Nathan Gunn's workout routine. Nathan Gunn and the new age of singers who look as goos as they sound have given new meaning to the term, "You look like an opera singer." That comment once meant that you looked like a singing pachyderm with a set of horns, belting out a few ho-jo-to-ho's. Barihunks can't imagine Kirsten Flagstad or Luciano Pavarotti being featured in the Health section of the Wall Street Journal. This is an encouraging trend. Read on to find out how you can look like Nathan Gunn when you whip off your shirt.


As an Operatic Hero, Nathan Gunn Needs to Look the Part; Pull-Ups Help

Nathan Gunn is an opera buff—quite literally. When the baritone is singing a passionate aria, he's often shirtless, showing off his sculpted chest.

As an opera singer, recording artist, father of five and voice instructor, Mr. Gunn, 39 years old, has little time to be a gym rat. To make sure he looks the part of the strapping hero he often plays, he relies on whatever he can squeeze in, from 45 minutes of riding a stationary bicycle to a few dozen push-ups and pull-ups.
Nathan Gunn's Workout

Mr. Gunn's physique sparked attention in 1997, when he played mythical Greek hero Orestes in Christoph Gluck's "Iphigenia in Tauris" at the Glimmerglass Opera near Cooperstown, N.Y. As part of the performance, he was on stage soaking wet and stripped to a loincloth, garnering interest from audience members and critics alike, he says. Mr. Gunn has been singing since he was eight years old, and has performed at such houses as the Metropolitan Opera, the San Francisco Opera, the Lyric Opera of Chicago and the Paris Opera.

"The great thing about opera, and most people don't realize it, is that it is all about sex and violence most of the time," says Mr. Gunn, who is 5-foot-11 and 185 pounds.

In addition to performing, Mr. Gunn is a professor of voice at his alma mater, the University of Illinois at Urbana-Champaign. He also performs recitals across the country with his pianist wife, Julie Jordan, who teaches music at the same college.

During the 10-month opera season, Mr. Gunn is mostly away from his Champaign, Ill., home. This month, Mr. Gunn performs as Figaro in Gioachino Rossini's "The Barber of Seville" at the L.A. Opera. In February he will be in "Don Pasquale" at the Dallas Opera and in April he stars in "The Magic Flute" at the Metropolitan Opera in New York.

As a result, his workout is a blend of whatever he feels like doing and is dependent on available equipment. But Mr. Gunn will always try to perform a series of strength exercises for about 20 minutes, five times a week. He says he doesn't want to get bulky on free weights, so he uses them only occasionally.

Mr. Gunn will do a series of push-ups, incline push-ups, handstand push-ups, handstand holds and pull-ups. He does his push-ups and pull-ups until failure, which is usually about 50 of them. He normally does three sets of handstand push-ups—15 repetitions for the first set, 10 for the second and eight for the last. For the handstand holds, an exercise he learned from his young gymnast daughter, he holds a handstand against a wall as long as possible to work his shoulders and arms. His top time: 90 seconds.

Mr. Gunn's knees have weakened over the years, so he will do short sprints instead of long-distance running about twice a week. He will sprint in short intervals for 30 minutes at a time. If he doesn't run, he will do a 45-minute stint on a stationary bicycle. It helps him sweat out the toxins he accumulates from constant traveling, he says. He tries to either run or bike five times a week.

Mr. Gunn has tried boxing, hiking, various martial arts to supplement his workout over the years. His current favorite is the Japanese martial art Aikido, a low-impact grappling sport. When he is home, Mr. Gunn attends a 6 a.m. eight-person class three times a week. "It suits singing well because you breathe in the same way," he says.

During his performance season, Mr. Gunn generally eats only one big meal a day, usually dinner. His favorite dish is grilled steak with onions and zucchini accompanied by a glass of red wine. He rarely eats breakfast but if he does, it's usually a cup of yogurt or piece of bread. "I only eat when I'm hungry," he says.

At home, Mr. Gunn's eating habits are generally the same, but his wife cooks dinner, and they will sometimes have chicken-noodle soup, a bag of potato chips and a cup of black coffee for lunch. Mr. Gunn says he will eat fries and potato chips once in a while. "If I'm too strict, then I'll want it too much," he says.

When he's home, Mr. Gunn goes to a university gym to work out and run. Membership costs about $25 a month, he says. Otherwise, he relies on whatever equipment is available at his rented apartment complex or hotel. During a recent stay in Los Angeles, his housing compound had a pool, so Mr. Gunn swam some laps.

For his daily strength routine, which often occurs in his apartment or hotel room, Mr. Gunn works out only in a pair of athletic shorts because he sweats "like crazy," he says. On runs and bike rides, he wears shorts and a T-shirt. He says a good pair of running shoes is important (Asics is one of his favorite brands), but he relies on the shoe store for help choosing them. "I just go to the shoe store and say I have bad knees," he says.

Mr. Gunn's best advice to staying in shape is to listen to your body. He knows he has weak knees and his body wasn't built for long runs, so he resigns himself to shorter bursts of running. "Stay within the limits of your ability, and don't push too hard," he says. "If you come to terms with that, you'll be healthy."

Mr. Gunn does a short round of favorite exercises: push-ups, handstand push-ups and sit-ups. To release pent-up adrenaline before a performance, he'll do a set of incline push-ups in his dressing room "I do just enough to tire my muscles out," he says.

Mr. Gunn is around music so much that when he works out, he prefers reading. On the stationary bike, he opts for historical fiction by Steven Pressfield or Bernard Cornwell. But when Mr. Gunn needs an intense workout, he'll tune his iPod to hard rock, such as Rammstein or System of a Down. "It gets your blood pumping," he says.