Yesterday we featured barihunks out in the English countryside, so it's only appropriate that we head up into the Colorado Rockies today. In beautiful Crested Butte, Colorado a trio of barihunks is also taking up Mozart. At the Crested Butte Music Festival, Philip Cutlip (Papageno), Keith Miller (Sarastro) and Marcell Bakonyi (Speaker) are performing the Magic Flute at the famed ski resort.

We've featured Cutlip and Miller extensively on this site in the past, but Bokonyi is a new singer for us. Bakonyi was born in 1980 in Győr, Hungary. He studied voice at the Leo-Weiner Conservatory of Music in Budapest, and later at the Hochschule für Musik, Stuttgart with Professor Julia Hamari where he also attended classes in Lieder singing. Since 2009 he has been a member of the ensemble of the Landestheater Salzburg where he sang the roles of Bartolo and Figaro in Le Nozze di Figaro, as well as Kaspar in Der Freischütz, Angelotti in Tosca and Bacco in Arianna, Dulcamara in L'elisir d'amore and Leporello in Don Giovanni.


Crested Butte is best known for their international film festival, skiing and as the birthplace of mountain biking. The Music Festival presents diverse array of music, dance and opera. This year's lineup includes Broadway tunes, bluegrass, jazz, sacred, chamber, symphonic and operatic fare. There is also a young artist training program headed by tenor Marcello Giordano. The Magic Flute will run from July 25-29. Visit their website for additional information.

In a sign that barihunks are being viewed as sex symbols more widely, Keith Miller was asked to model for this Suburu ad and we think he looks pretty hot. 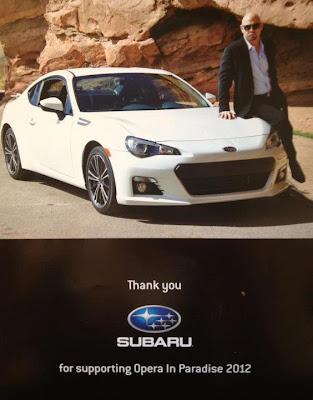