Introducing Barihunk Timothy McNair; Performing in The Grapes of Wrath 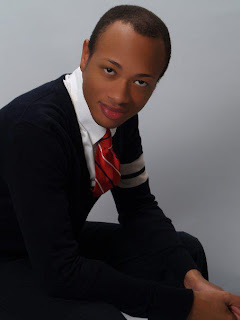 It's inadvertently turned into Ricky Ian Gordon week on Barihunks this week, but when you write great roles for baritones, it's bound to happen. Gordon just had a huge critical and artistic success with his mini-opera "Green Sneakers" in San Francisco directed by John de los Santos and starring the compelling barihunk Jesse Blumberg. Now his most heralded piece, "The Grapes of Wrath" is getting a few performances at Northwestern University this week.

In the role of Huston is 24-year-old Timothy McNair who is pursuing his Mater of Music degree at Northwestern University's Bienen School of Music. McNair's character has a shower scene in Act 3, so the young bass-barihunk has been staying fit by working out with a personal trainer. His circuit workout includes rowing, plank, pushups, kettle bells, pull-ups and medicine ball presses. We think that the results are excellent!

Based on John Steinbeck’s 1939 novel, with a libretto by Tony nominee Michael Korie, the opera follows the Joad family from the Oklahoma Dust Bowl to California in search of a better life. Gordon’s score evokes American popular music of the 1920s and ’30s, bringing new depth to this tale of hope in the face of despair. Guest baritone Robert Orth, who played Uncle John in the opera’s 2007 premiere, reprises his role in this production.

McNair is the full Eckstein scholarship recipient "Master of Music-Voice and Opera" for the class of 2014 at Northwestern's Bienen School of Music. and he starred as Luciano in the 2012 fall production of John Musto's chamber opera Bastianello. Tickets are available online.
at 7:39 AM