One of our favorite young barihunks, Philippe Sly, joins the wonderful soprano Hélène Guilmette in "Les amants trahis," an album of cantatas by Jean-Philippe Rameau. The cantatas were originally performed  at Salle Bourgie of the Montreal Fine Arts Museum last year and the CD includes the same ensemble consisting of Adrian Butterfield and Chloé Meyers (violin), Grégoire Jeay (flute), Mélisande Corriveau (viola da gamba) and Luc Beauséjour (harpsichord). The album is available for purchase on March 12.

Check out our previous posts about Sly's last recording "In Dreams." 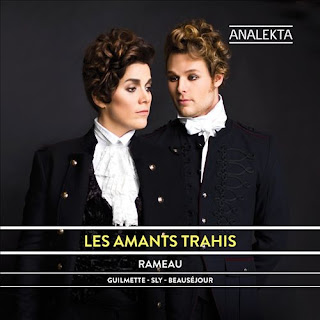 Sly is the first prize winner of the prestigious 2012 Concours Musical International de Montréal and a grand prize winner of the 2011 Metropolitan Opera National Council Auditions singing the varied repertoire of Mozart, Bach, Handel, Stravinsky and Wagner. Later that year, he became a member of the ensemble at the Canadian Opera Company where he was seen as Hermann in Offenbach's 'Les contes d’Hoffmann', Amantio di Nicolai in a new production of Puccini's 'Gianni Schicchi' , as well as A Scythian Man in Gluck's 'Iphigénie en Tauride' alongside the Iphigénie of Susan Graham.

In the summer of 2012, Sly joined the Young Singers Project at the Salzburg Festival where he made his Festival debut as Sithos in von Winter’s 'Das Labyrinth' under the baton of Ivor Bolton. This season, the French-Canadian singer becomes a member of the prestigious Adler Fellowship Program at the San Francisco Opera where he will make his mainstage debut as Guglielmo in Mozart's 'Così fan tutte' under music director Nicola Luisotti. Tickets for Così fan tutte are available on the San Francisco Opera website.