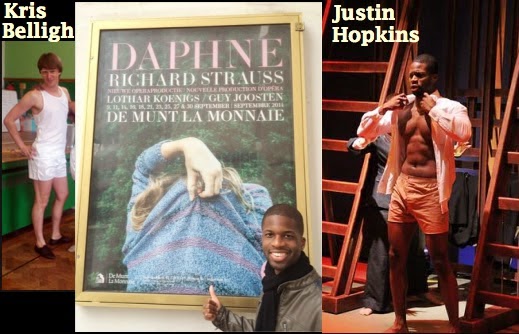 We recently posted about Richard Strauss' Daphne at the Théâtre de la Monnaie in Brussels featuring three singers who have appeared on this site: Matt Boehler, Justin Hopkins and Kris Belligh.  The opera, which is running through September 30th, features an all-star cast led by Sally Matthews as Daphne, Eric Cutler as Apollo, Peter Lodahl and Leukippos and Iain Paterson as Peneios.

La Monnaie will have the performance available on their website for free from October 1st through the 21st.

Upcoming roles for Justin Hopkins include the sold out world premiere of Repast: An Oratorio Homage to Booker Wright in Oxford, Mississippi, the role of Publio in Mozart's La Clemenza di Tito with Opera in the Heights, and Britten's War Requiem with the Dayton Philharmonic.

Upcoming performance for Matt Boehler include Rocco in Beethoven's Fidelio with the Madison Opera and Bertrand in Tchaikovsky's Iolanta at the Metropolitan Opera.
at 2:21 PM