Ludwig Mittelhammer and Jonathan Ware in the final round of the Wolf Competition:

Mittelhammer was a boy soprano soloist with the famous Tölzer Boys Choir and became a member of the Bavarian Singakademie when his voice changed. He studied with Hartmut Elbert and was twice awarded with the “Bundespreis” at the Jugend-Musiziert Competition in the category ‘Duo-Kunstlied’ in 2007 and the ‘Gesang Solo’ in 2008.

Since 2009, he has studied at the Hochschule für Musik und Theater in Munich and at the Bayerische Theaterakademie. In 2011, he joined the Extra Choir of the Bavarian Broadcasting Cooperation, as well as taking master classes with Dietrich Fischer-Dieskau at the Schubertiade Schwarzenberg. 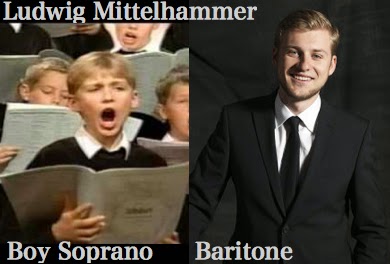 In 2010, he made his debut as Marco in Puccini‘s Gianni Schicchi at the German-French Forum Young Arts in Bayreuth. In 2013, he performed his first Papageno in Mozart’s Die Zauberflöte in Ulm and Guglielmo in Mozart’s Così fan tutte in Bad Reichenhall. Earlier this year, he performed Demetrios in Oberteithner’s Aphrodite in Munich.

Mittelhammer was awarded the Special Prize for the best interpretation of a Goethe-Lied by Wolfgang Rihm at the 2014 Mendelssohn Competition in Berlin.

In 2013, the baritone made his debuts with Bochumer Symphoniker, at the International Festival Heidelberger Frühling and with Krasnoyarsk Symphony Orchestra. In 2015, Ludwig Mittelhammer will go on tour with Concerto Köln singing Christus in Bach’s St. Matthew Passion.
at 5:21 PM