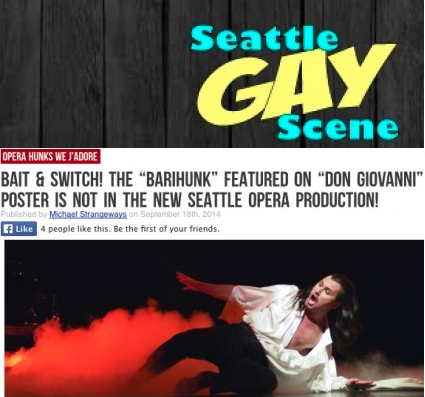 We have to admit that were impressed that writer Michael Strangeways actually knew that Mariusz Kwiecien was one of the inspirations for Barihunks (big "B').  In fact after two of us had seen the "Hot Pole" in separate productions of Don Giovanni (in Seattle and San Francisco), the seeds of this site were planted seven years ago. So, naturally, one would think that we'd be disappointed, too. But we're regulars at the Seattle Opera and have no doubt that they will deliver an amazing performance of Mozart's timeless classic.

In fact, they've cast two singers who have been featured on this site, Evan Boyer as Masetto and Erik Anstine as Leporello. Those two should adequately fill the requisite "minimum barihunk requirement" for Don Giovanni. French bass Nicolas Cavallier will sing the title role. Performances will run from October 18 through November 1 and tickets and additional cast information are available online.
If Michael Strangeways, or anyone else, wants to see Mariusz Kwiecien as The Don, then should fly to the Windy City, where he's starring in their production alongside fellow barihunk Kyle Ketelsen's Leporello. The Lyric Opera of Chicago even has a feature online called "Rolling with the Don" where the singer talks about the role (and is referred to as a "barihunk"). Performances run through October 29th and tickets are available online. Oddly, Lyric's website does not list who is singing Masetto.
at 6:40 AM