Wexford sells out for European premiere of Silent Night

Kevin Puts' Pulitzer Prize-winning opera Silent Night got its long-awaited European debut today at the Wexford Opera Festival. Opening night was completely sold out and tickets are going fast for the remaining performances through November 2.

The cast is a mix of Europeans and Americans and is loaded with barihunks. Wexford has cast Matthew Worth as Lieutenant Audebart, Quirijn de Lang as the lovable Poncel, Ian Beadle as William Dale and Jamie Rock as Gueusselin.

Commissioned by the Minnesota Opera and first performed in 2011, the opera was inspired by the 2005 film Joyeux Noël about the spontaneous Christmas truce between enemy combatants during the First World War. Its core message is that war is not sustainable when you come to know your enemy as a person.

On October 25th, composer Kevin Puts and librettist Mark Campbell will present a talk about the work at 11 AM. The film Joyeux Noël will be screened in the Jerome Hynes Theatre in Wexford Opera House at 10:30 am on the days of the Silent Night performances. There is no charge but tickets must be booked through the Box Office. 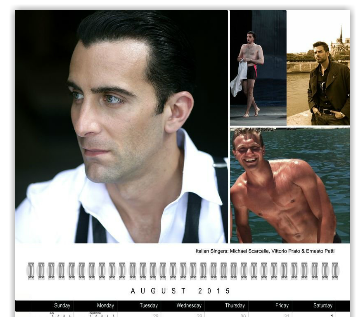 HOT OFF THE PRESSES!!! Don't forget to buy the sexy new Barihunks Charity Calendar: VIVA, ITALIA! It features 19 of the sexiest men from the world of opera. Click on the LULU button below to order your copy now.