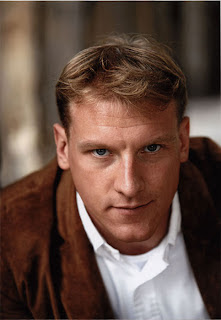 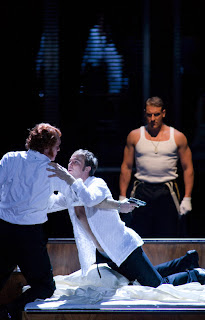 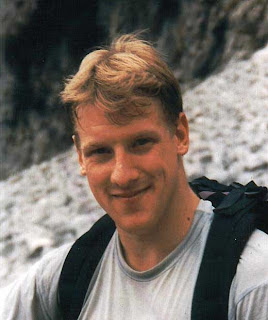 Austrian barihunk Günther Groissböck was born in 1976 and made his professional debut in Jacobo Peri's "Euridice" in 2001. He studied at the Academy for Music and Performing Arts in Vienna where he had been taking part in Robert Holl’s master
class. Since 2005 he works regularly with José van Dam.

From the looks of one of the photos, he appears to like "hiking and long walks in the country." Any takers?

He has a much lower voice than our traditional barihunk, so his repertoire includes not-so-hunky roles like Don Ferrando in Fidelio, Sarastro in Zauberflote, the King in Aida and Fafner in Das Rheingold. Of course some German director managed to create a production of Eugene Onegin with him in a revealing tee shirt, which is where the center photo comes from. He will be performing Fafner in San Francisco Opera's production this summer. if I were a Rheinmaiden, I'd go after Fafner and leave the gold behind.

In 2010 he makes his Metropolitan Opera debut as Colline in La Boheme.

Does anyone have ideas for a barihunk nickname?
at 5:29 AM