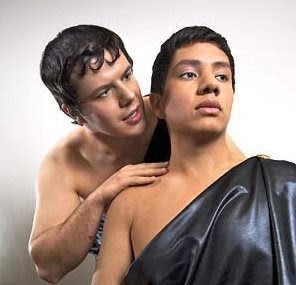 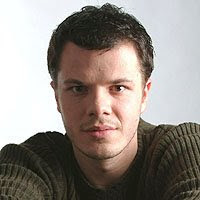 The requests for new barihunks are getting much better from the readership. Peter33 suggests Eugene Brancoveanu, which has forced me to create the alternate spelling, bearihunk.

Eugene is another hunky graduate of the Merola program in San Francisco [how do they concentrate on singing in that program?]. Like Marian Pop, he is originally from Romania and is now making his career primarily in the United States. Peter33 is correct that he performed in the buff in a San Francisco performance of Britten's "Rape of Lucretia" and he created quite a buzz. He also was partially nude in Lou Harrison's "Young Caesar," also performed in San Francisco [how do we get anything done in this city?]. The photo above is from that campy production.

Brancoveanu has become a fan favorite at the San Francisco Opera, often stealing scenes with cameo roles. He received an honorary Tony Award for his performance of Marcello in Baz Luhrmann’s Broadway production of La Bohème.

He's a little bigger than the usual barihunk, like the hot Luca Grassi, but he exudes sexuality on stage like few others.
at 7:54 PM