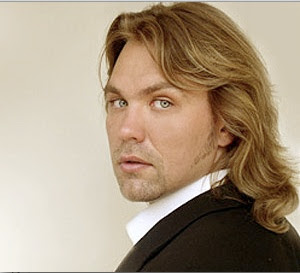 Although it is highly unlikely, if we ever tire of looking at barihunk Dmitri Hvorostovsky, we have a hot Russian waiting in the wings.

30-year-old Mikhail Davydov graduated from the Musical School of the Moscow Conservatory in 1995. He won second place in the Elena Obraztsova International Vocal Competition in 2000, but would have won if it was a beauty pageant!

His repertoire has been fairly eclectic and includes Berg's Lulu, Rachmaninov's Aleko and Nyman's The Man Who Mistook His Wife For A Hat.
at 9:46 PM