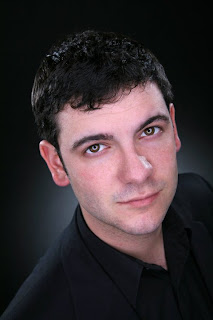 Cedar Rapids, Iowa is probably best known for corn, Quaker Oats and for being the home of actor Ashton Kutcher and NFL quarterback Kurt Warner. It's also a surprisingly cultural city, with a thriving arts scene deeply rooted in Eastern European immigration. So we weren't surprised when we learned that two Iowa natives were coming to Mount Mercy University for a free concert.

On Sunday, April 29, at 3:30 p.m. soprano Katharine Goeldner will join emerging barihunk Chris Carr for the program "A Path to the Future: Music of Discovery" in the University Center Commons. The performance is free and open to the public. The duo will perform Gustav Mahler's Songs of a Wayfarer and Rückert Lieder, and arias by Verdi, Tchaikovsky, Korngold, Barber, and more. The concert is the first musical performance held in Mount Mercy's new University Center.

Carr will be appearing next season with Lyric Opera of Kansas City as Yamadori in Butterfly and Pish-Tush in Mikado!

In October, he will take on the daunting baritone role in the Carmina Burana with the Kansas City Ballet.

We adore the multi-talented Matthew Morris, who seems destined for an amazing career. If you're near the bucolic Hudson River valley, don't miss the chance to see Morris in his graduate vocal recital on Saturday, April 21, 2012, 3:00 pm at the Bard College Conservatory of Music. Tickets are free and can be obtained by calling (845) 758-7196.

Morris will be accompanied on the piano by Milena Gligic in a program that includes Charles Ives'
Down East, Charlie Rutlage and General William Booth Enters into Heaven; Franz Schubert's Fischerweise and Des Fischers Liebesglück; Peter Warlock's My Own Country; Claude Debussy's
Troi Ballades de François Villon; Tom Cipullo's "A Death in the Family" (from The Land of Nod); Irving Gifford Fine's "Lenny the Leopard" (from Childhood Fables for Grownups); and, Gabriel Fauré's En Sourdine.