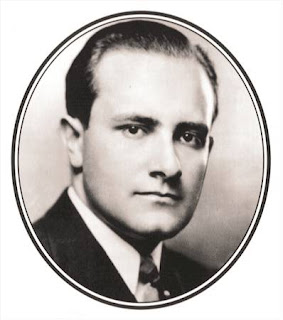 Today we celebrate the birthday of one of the greatest American baritones ever, Leonard Warren (born Warenoff). The family Americanized the name when his Russian father settled in the United States.

Warren's first job was working in his father's fur business in New York In 1935.  He studied voice with Sidney Dietch and the great Giuseppe De Luca and joined the chorus of Radio City Music Hall. In 1938 he won the Metropolitan Opera Auditions of the Air and was granted a stipend to study in Italy.

Warren made his debut at the Metropolitan Opera in excerpts from Verdi's La Traviata and Leoncavallo's Pagliacci in November 1938. His formal operatic debut took place in New York in January 1939, when he sang Paolo in Simon Boccanegra. He quickly became one of the most popular baritones of his time. He also sang in San Francisco, Chicago, Canada, and South America. He appeared at La Scala in Milan in 1953. In 1958, he made a highly successful tour of the Soviet Union. His last complete performance at the Metropolitan Opera was as Simon Boccanegra on March 1, 1960. Three days later he collapsed while singing the aria "Urna fatale dal mio destino;" as Don Carlo during a performance of Verdi's La forza del destino. He had suffered a cerebral hemorrhage and died backstage.

Leonard Warren was particularly acclaimed as one of the foremost interpreters of the great Verdi baritone roles; he also sang the parts of Tonio in Pagliacci, Escamillo in Carmen, and Scarpia in Tosca. He was reputed to be a person of an intractable character, who always tried to impose his will on stage designers, managers, and even conductors, in matters of production, direction, and tempi. He caused pain, a colleague said, but he had a great voice.