Canadian Barihunks featured on CBC's "30 under 30" 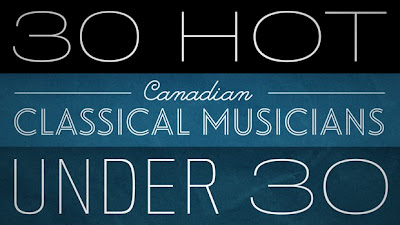 The CBC recently ran a feature called "30 Hot Canadian Classical Musicians Under 30." They surveyed Canada's conservatories, music competitions and professional training programs to come up with their list. Although we at Barihunks take the word "HOT" to mean sexy, it appears that they are going for a double meaning, with "HOT" also meaning "musicians with talent to keep an eye on," since they range in age from 8 to 28.

Both male singers featured are baritones who have appeared on our site and Philippe Sly even gets mentioned for regularly appearing on our site. We've heard other singers joke that Gordon Bintner is incapable of taking a bad picture and we couldn't agree more. Both Bintner and Sly are not only easy on the eyes, but they are indeed two of the most gifted musicians coming out of Canada.

As an aside, the featured soprano Wallis Giunta, is the girlfriend of barihunk John Brancy, who we've featured extensively of late. Small world!

Age: 25
From: Regina, Sask.
Hot because: The last 12 months have been huge for Bintner: he won first prize and the People's Choice Award at the 2012 Canadian Opera Company Ensemble Studio Competition, and in May he made his debut with L'Opéra de Montréal singing Lescaut in Massenet's Manon. We think he looks too sweet to portray womanizing Don Giovanni, but Bintner says it's his dream role.

Age: 24
From: Ottawa, Ont.
Hot because: Sly has a way of impressing audiences and judges. He’s won both the Metropolitan Opera National Council Auditions (which come with a cool $15,000 prize) and the Montreal International Musical Competition (add another $55,000 in winnings). Oh, he also makes frequent appearances on the popular Barihunks blog.