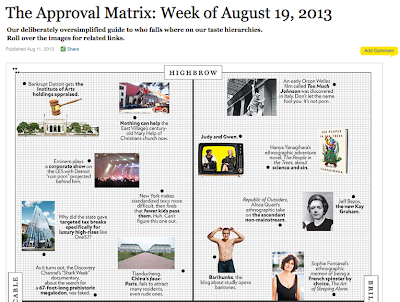 Barihunks is honored to have made the NY Magazine's "Approval Matrix" for the week of August 19th. And we're in the HIGHBROW and BRILLIANT quadrant! See the entire matrix at their website.

The describe the matrix as, "Our deliberately oversimplified guide to who falls where on our taste hierarchies." We are joined by a pretty illustrious group that includes Orson Welles' rediscovered film "Too Much Johnson," PBS' "Judy & Gwen" all-female co-anchor team, Hanya Yanagihara's novel "The People in the Trees," Jeff Bezos, new owner of the Washington Post, Alissa Quart's "Republic of Outsiders" and Sophie Fontanel's "French spinster by choice."

We're so glad that we weren't in the LOWBROW and DESPICABLE quadrant with Justin Bieber, Alex Rodriguez and Sydney Leather.  By the way, we really do try to keep ourselves as highbrow as possible considering that we post lots of operatic beefcake. We hope that you find us informative, as well as enjoyable to look at.

Since we know you're going to ask, the barihunk in the picture is Jonathan Estabrooks, our Mr. July for the 2014 Barihunks Calendar (due out in about 5 weeks). He was also Mr. July this year. We figured since he's Canadian, he gets the month of the Canada Day celebrations.

If you're in New York on August 15th, keep your eyes out for Estabrooks, as he's being photographed for the calendar by MyPhotographyNYC.com, our official Barihunks photographer in New York. This year's calendar is being professionally shot rather than including self-submitted pictures and promises to be the hottest ever.
at 12:27 PM