The always inventive and interesting Belgian barihunk and artistic director Romain Dayez has put together a new show called "De Profundis" featuring the music of Philip Glass, Arvo Pärt and Solange Labbe. The show will also include contemporary dance. Dayez who adminsters and performs with the ALLIAGE Art Project will be presenting the performance on September 22 at Eglise Royale Sainte-Marie Church in Brussels, Belgium.

ALLIAGE is a multi-arts performance group that performs traditional to contemporary works while marrying various art forms. The group is committed to honoring authentic musical styles while creating an original artistic vision, usually around one single project.

ALLIAGE brings together all kinds of artists - including artists, dancers, architects, actors, writers and singers - into unexpected with the goal of reaching a wider audience. This collaborative process is intended to expand artistic boundaries and create new and exciting musical experiences. 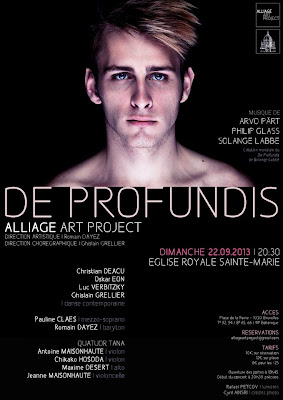 The 24-year old singer studied at the Conservatoire Royal de Bruxelles and later at the Conservatoire National Supérieur de Musique de Paris. He has performed the ancient music and baroque repertory extensively with some of the leading early music conductors in Europe. This includes concerts, oratorios and operas. He has been seen in many standard repertory operas at the Opéra de Metz and Théâtre du Châtelet, and is a regular soloist at the Cathédrale de Bruxelles.

Having grown up in a family of artists, he loves experimenting with new collaborations, having even performed with the Parisian rap group Milk Coffee & Sugar. He should also add "model" to his résumé, as we find his posters featuring his image as eye-catching as any in classical music.