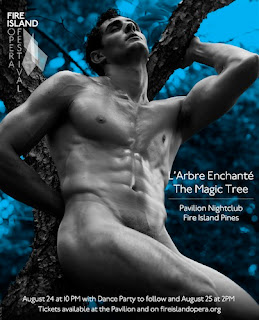 Fire Island is known more for its circuit parties booming with house music, rather than presenting high culture, but that will all change this weekend.  The annual Fire Island Opera Festival will be presented on August 23-25 at the famous gay resort and will feature Christoph Willibald Gluck's rarely performed L’arbre Enchanté (“The Magic Tree”) and Lee Hoiby's Bon Appétit.


The festival kicks off with a VIP event on Friday, August 23 featuring a special gala performance of Bon Appétit, as well as a program of famous opera arias performed by the stars of the Fire Island Opera Festival.  Bon Appétit provides a witty take on one of chef Julia Childs, played by 2013 "BBC Cardiff Singer of the World" winner Jamie Barton. The evening will be hosted at an exclusive private home on the bay. 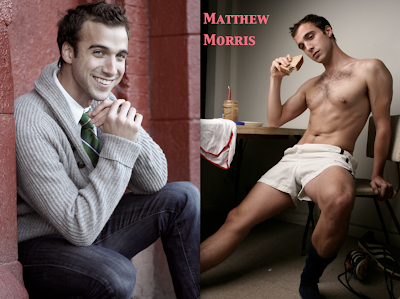 The real treat for lovers of all think barihunky will be L'Arbre Enchanté, which features Matthew Morris, who created a huge sensation in the Barihunks Calendar eating a sandwich in his boxers[see above]. Morris was also recently featured in Buzzfeed's "33 Opera Hunks Who Need To Serenade You Right Now." Word is that Morris will be showing a lot of skin...A LOT OF SKIN! This is Fire Island, after all.

The opera, which was last performed in 1775 for Marie-Antoinette at Versailles, with some equally lusty men we assume, also features David Pittsinger, David Garry, Will Ferguson, Amy Justman, Yiselle Blum and Emmett O'Hanlon.  L'Arbre Enchanté is the story of two men fighting for the love of a beautiful young man. The young man must choose between a  dashing, rich business man with a beach mansion or a hot, penniless, pool boy.

Performances will be at the newly rebuilt Pavilion on Fire Island Pines, converted into a beach opera house by Marfa-based installation artist Charles Mary Kubricht using only repurposed wood and materials from trees and structures destroyed during Hurricane Sandy. A portion of the proceeds from the inaugural Fire Island Opera Festival will benefit the Sea Shore Defense Fund.
at 7:27 AM