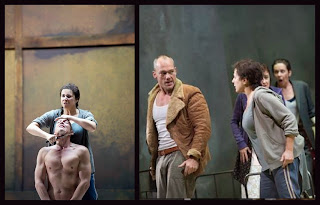 There will be two opportunities to see the highly successful production of Gluck's Iphigénie en Tauride at the 2015 Whitsun Festival at Salzburg, which still has two performances remaining on May 22 and 25. If you can't make the current run, it will be revived from August 19-28 and opening night is already sold out.

The opera features barihunk Christopher Maltman as Oreste in the best shape of his life (which is saying something!). He'll be joined in the cast by Cecilia Bartoli as Iphigénie, Michael Kraus as Thoas and Rolando Villazón as Pylade.

With Iphigénie en Tauride, Gluck took the final step in his mission of operatic reform, radically distancing himself from both the formulaic opera seria, with its rigid sequence of numbers, and traditional French opera, creating a psychologically sound musical drama with self-contained scenes and integrated arias.

Gluck had long since given the chorus an active role, and in this work, the ballet scenes that were obligatory in Paris are no longer harmless, non-committal amusements, but organically integrated in the action. Gluck stated that opera “...should speak the language of the heart, credibly portray great human passions, and serve poetry.”

Visit the Salzburg Festival website for additional information.
at 7:47 AM